In an earlier post I stated I wasn’t going to buy boxes of the main release this year and was just going to enter some box breaks online for the Cubs and Twins and then purchase the complete set at the end of the year.

eBay prices have forced me to change course. The Cubs have been selling for obscene prices – $77, 83, 68, 65, 87, 74?!?! for a 3 box Jumbo break! Sure, they have more cards since they won the WS but in 3 Jumbo boxes you’re going to get about three base team sets, a few inserts, possibly a variant, and the really lucky ones will pull a relic. Most of them will not get an auto. 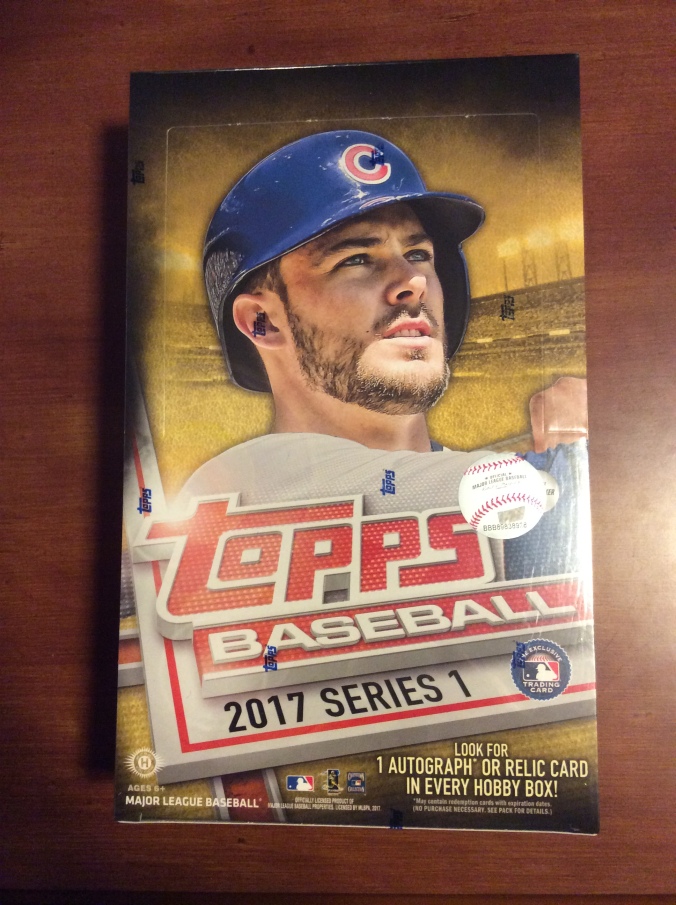 Kris Bryant gets the box again to start his 3rd season. Is a 40 HR year coming? 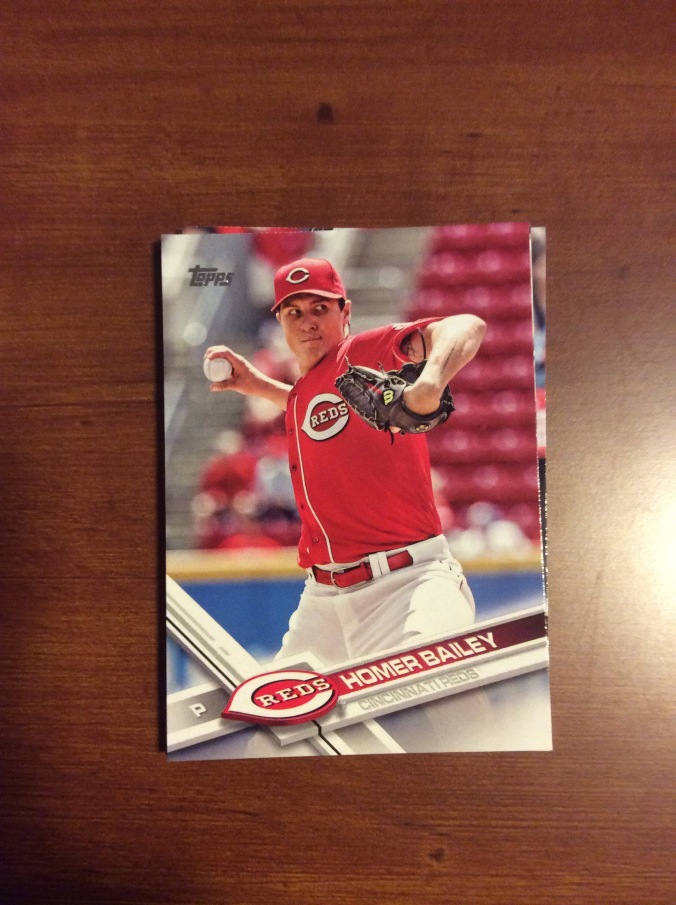 My first card showcases a modern angular perspective design for the cards. I like it, just not as much as the 2015 cards. The backs have  a nice bold color scheme as well as some players’ twitter and instagram account tags so fans can follow them on such. (Hopefully being cordial and respectful, never harassing!) 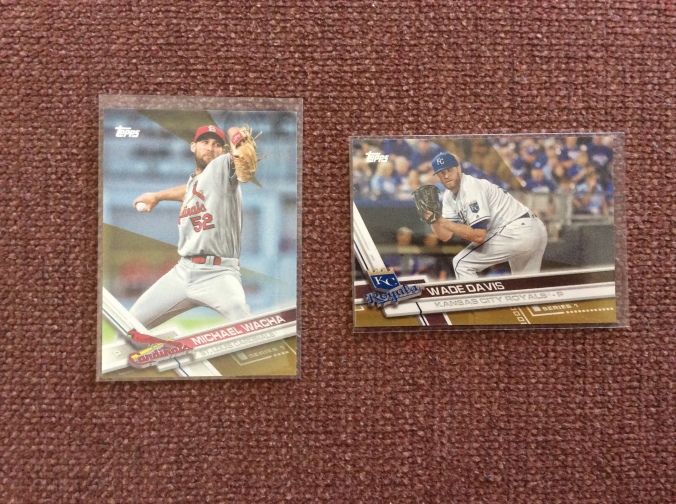 The Golds are pretty lackluster this time around with a small patch as shown. 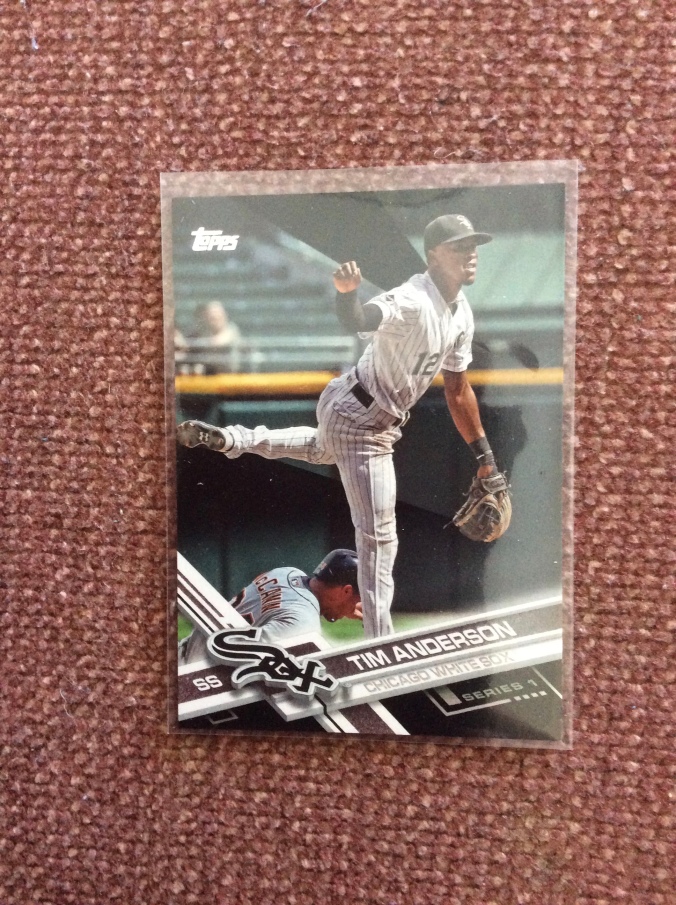 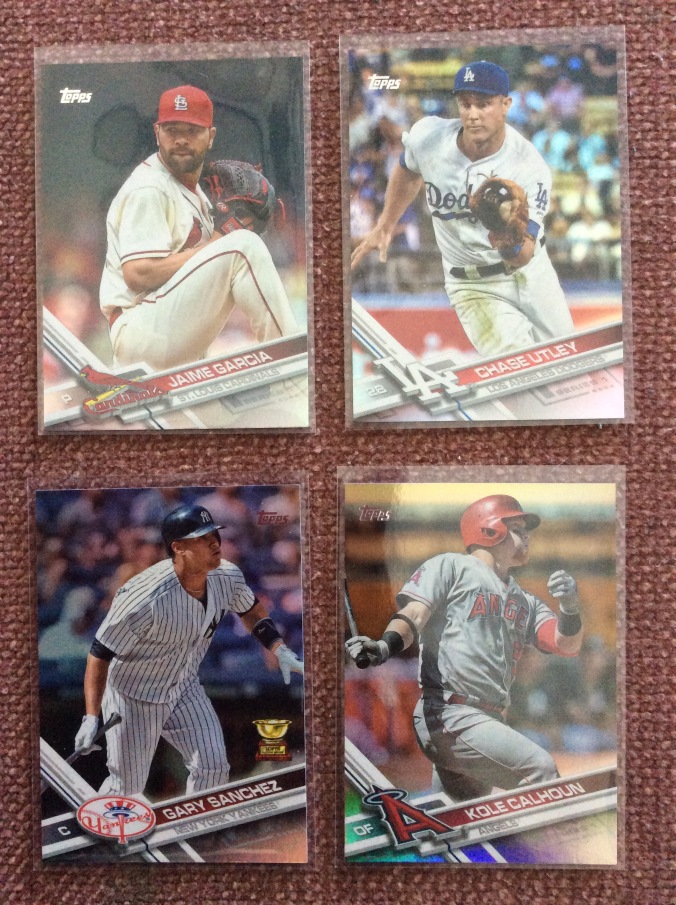 The foils standout to me once again with the full picture bleed. My pic doesn’t really show how cool they are. If you have any Twins or Cubs of these please send them my way! 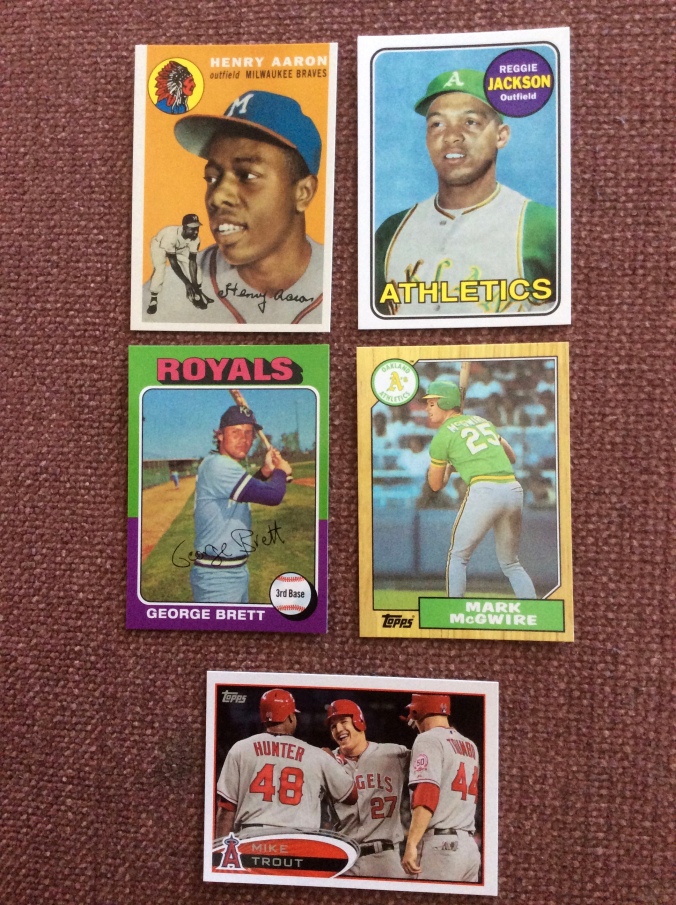 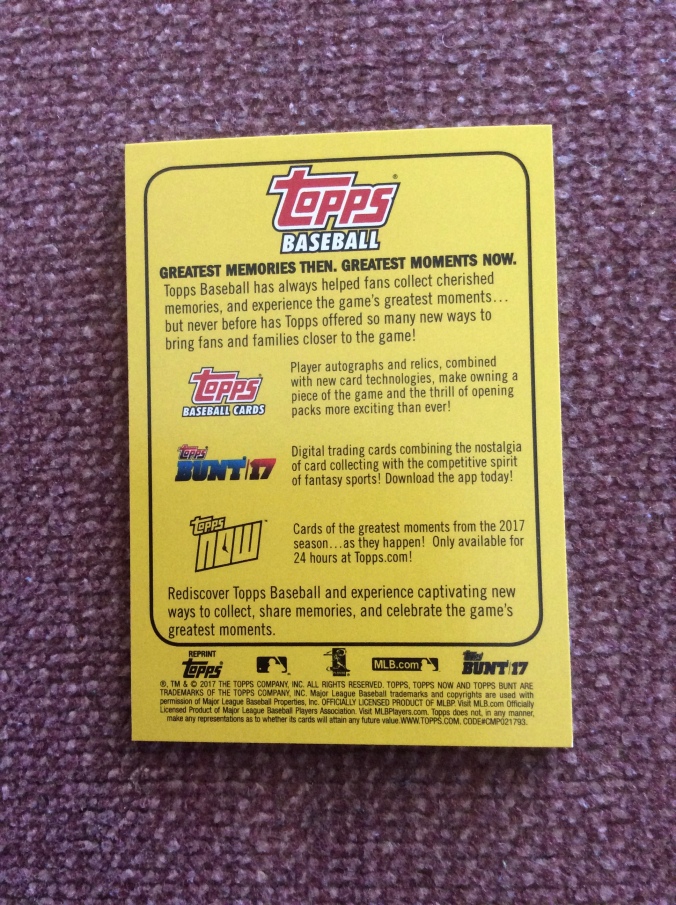 Sigh. These are reprints of classic cards with advertisements on the back. I’m not sure if these counted towards my cards per pack but I’d of preferred them to be simply ads and not to have them disguised as cards. 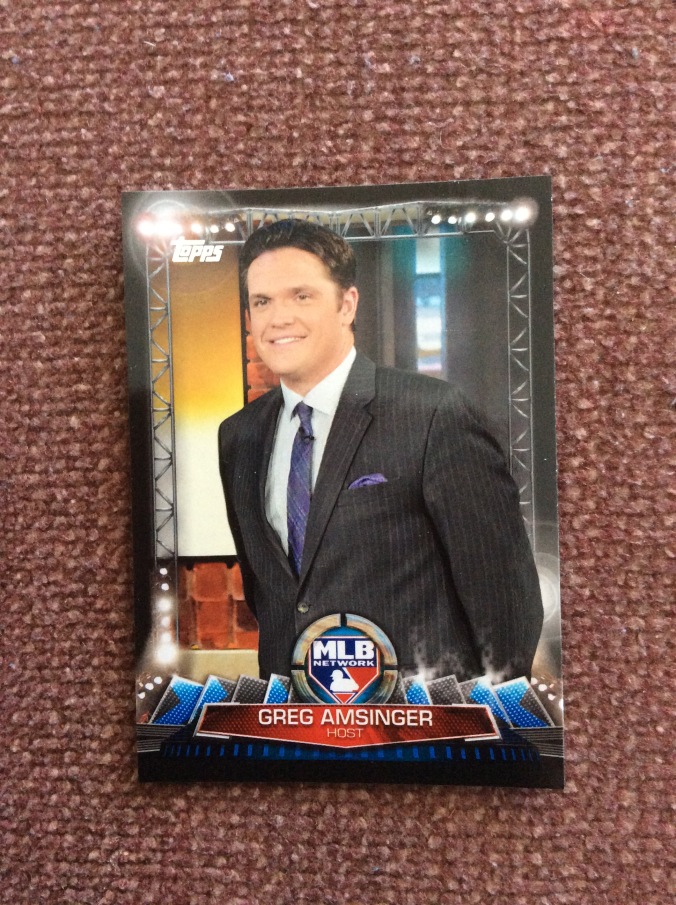 1:36 pull. I don’t watch the MLB Network but I can see how this would be kinda cool for those who do. Maybe Topps recognized this and that’s why they made them scarcer then the ad cards! 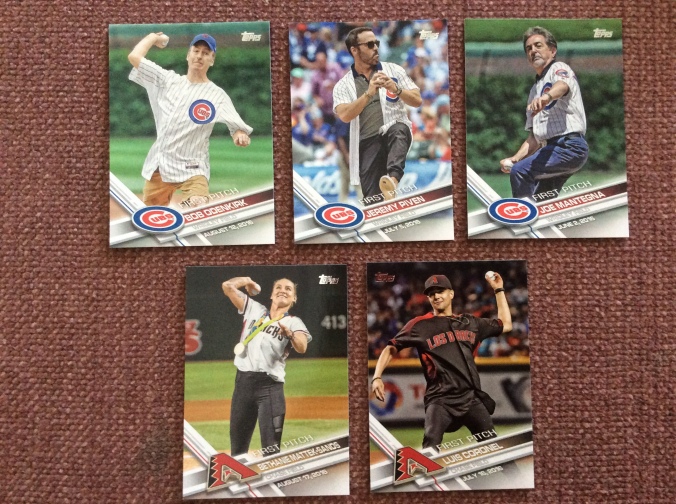 I have a strong feeling that the First Pitch inserts are going to be included in every main release set for eternity. I love them. There does seem to be a Wrigley Field bias. 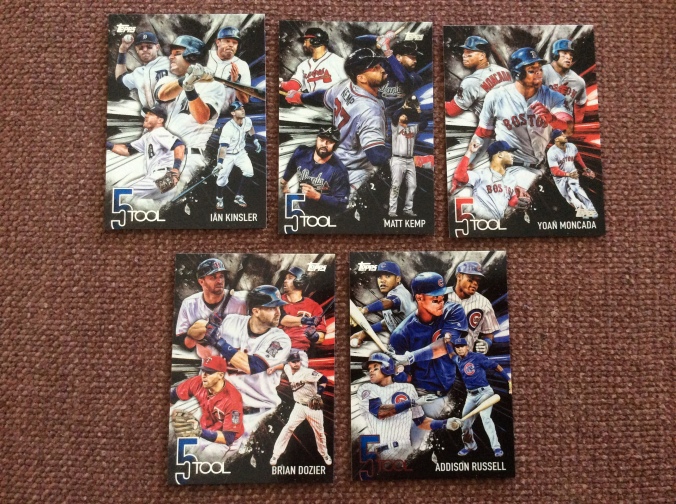 I love the 5 Tool set as well. Great design, nice player selection, interesting write-ups. I’m only going to collect certain players since the checklist on this is 50 cards so the Kemp, Kindler, and Moncada are available for trade. 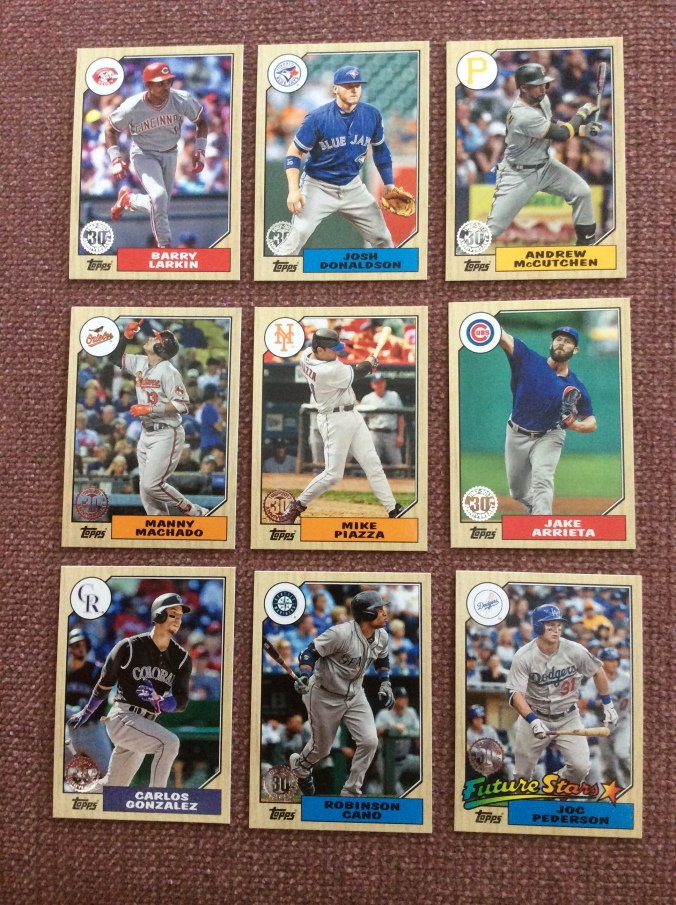 My first year of collecting cards was 1987. This is going to be an ambitious undertaking but I’m going to try to complete this 100 card set. Please send me any you can spare! 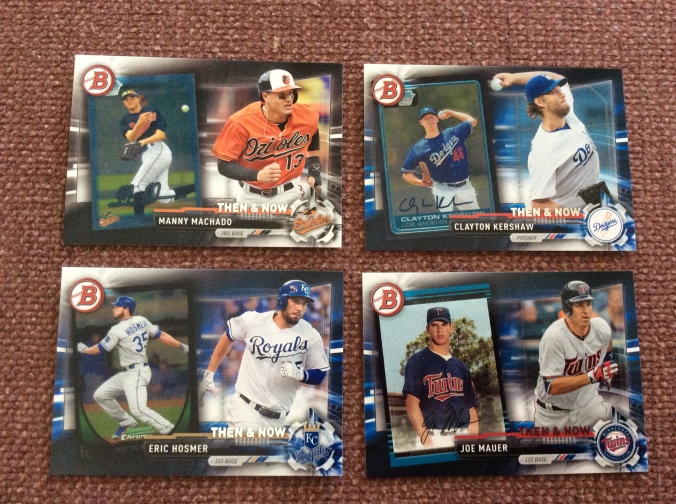 I have no interest in Bowman cards but I’m going to keep these except the Machado. 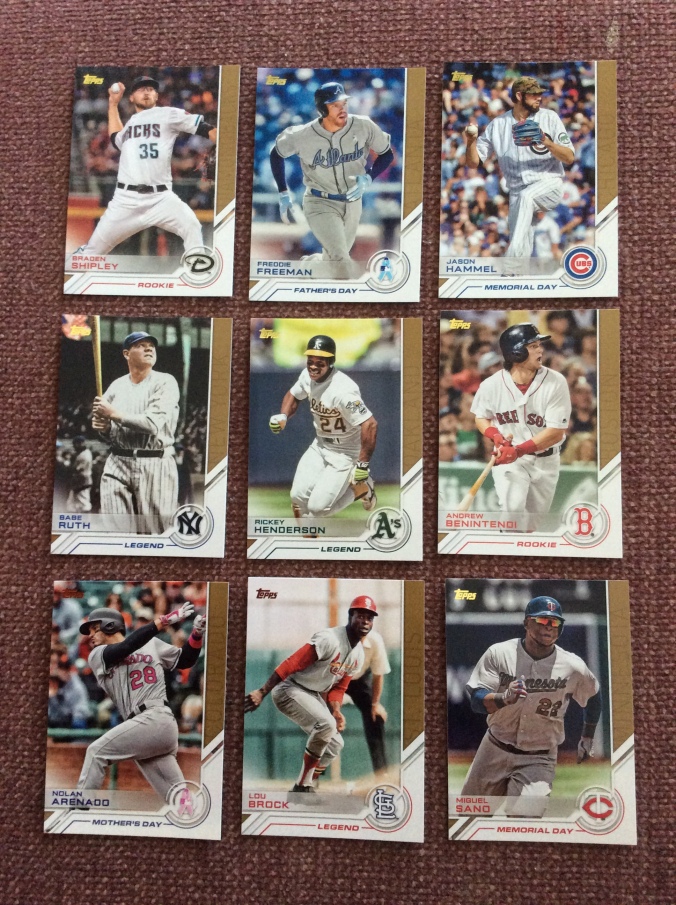 This seems to be overkill. There already is an insert set with a huge checklist and then they include this Topps Salute set as well with another 100 cards. I feel like they should have just concentrated on the holidays for this one and left out the Legends and Rookies. These are available for trade except the Sano. 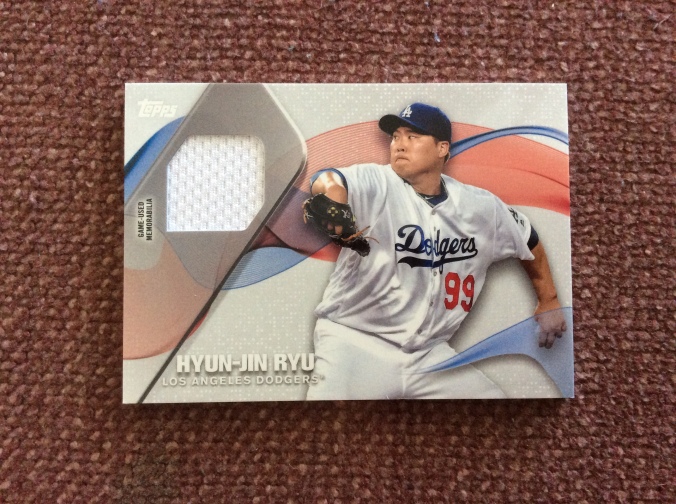 Another sigh. I’ve never been a fan of relics but I have become used to their appearance. What bothers me with this one isn’t the design. I think that looks great. In my mind I was pretty sure Ryu was injured last year. I checked Baseball Reference. Yep. One game. ONE GAME! He went 4.2 innings and allowed 6 runs! If he’s healed and ready to pitch this year – Great! Save these for Series 2. Over 900 players played in 2016 and Topps includes a relic of the guy who played in one of them. Sigh. 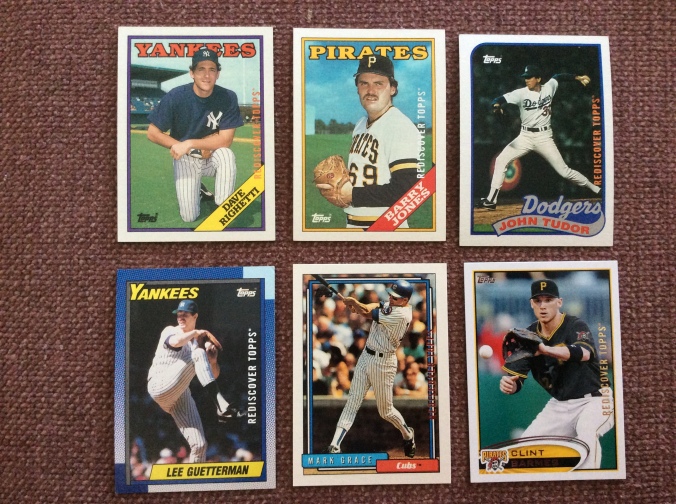 And, yeah. Buybacks are now called Rediscover Topps. I did get a 1974 card in a Jumbo but this is what I pulled from the hobby box. My 3rd sigh.

I don’t think I’m going to buy anymore so it’ll be interesting to see if I can trade for the set, especially the 87 inserts. If you can help, let me know! I did buy two judo packs so I do have some base doubles and a few more inserts.

2016 is long gone and the new year will bring several new sets. I’ve broaden my collection from the Topps Main release and Topps Heritage to now include Gypsy Queen and Allen & Ginter.

In an attempt to limit my spending and the quantity of cards in my home I think I’m going to pass on buying any hobby boxes of the 2017 series 1 & 2. At the end of the year I’ll probably buy the complete set box from Target and call it a day.

However, I do collect the team sets of both the MN Twins and the Cubs so I’m going to enter box breaks for each of them. If you have a favorite breaking group – let me know!

Trading will continue to be a huge part of this blog, even though I rarely post my trades anymore (sorry about that trading partners!).

For older sets, I still need to start 2003, 2005, and 2006 Heritage but I’d really like to cross a few of the other sets off my needs list first. My Heritage needs are here. Most likely I won’t be starting any more Heritage sets this year besides 2017.

Of course I will continue the blogs tradition of sending out some 2017 Heritage packs to my readers!

I’d also love to complete any of the Gypsy Queen sets. My needs for GQ are here.

When I started Allen & Ginter last year I only went back to 2011. This gave me a nice 5 year catch up mark. I grabbed some boxes of 2011 & 2014 since they seemed to be more reasonably priced than the rest. I then grabbed complete sets of 2012 & 2015 on eBay for less then $25 each. I had picked up a large 2013 insert lot on eBay but hadn’t purchased any boxes until Blowout Cards had a special a few weeks ago. I just broke up the box yesterday. Out came this – 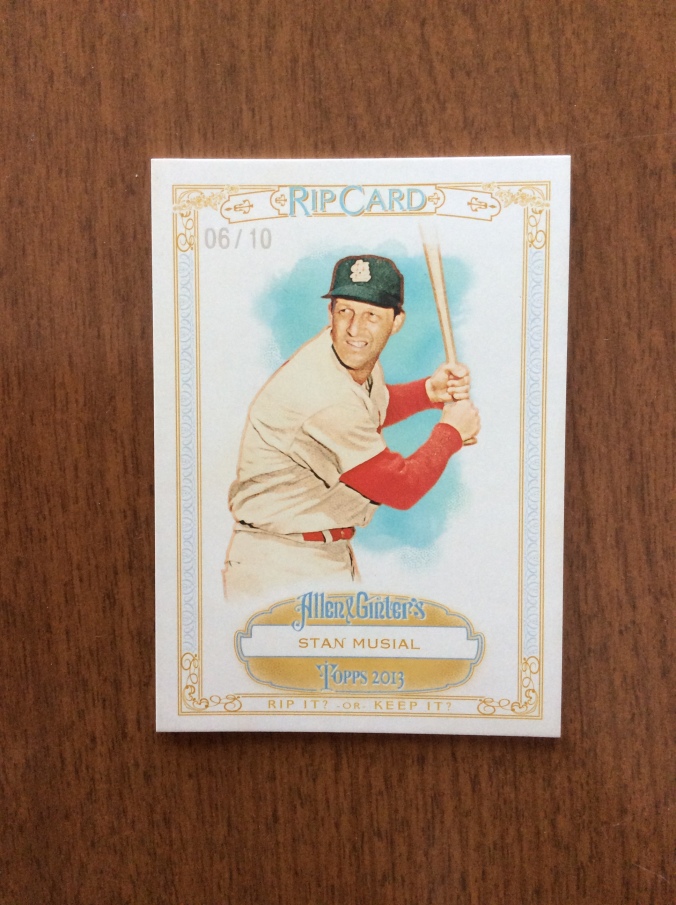 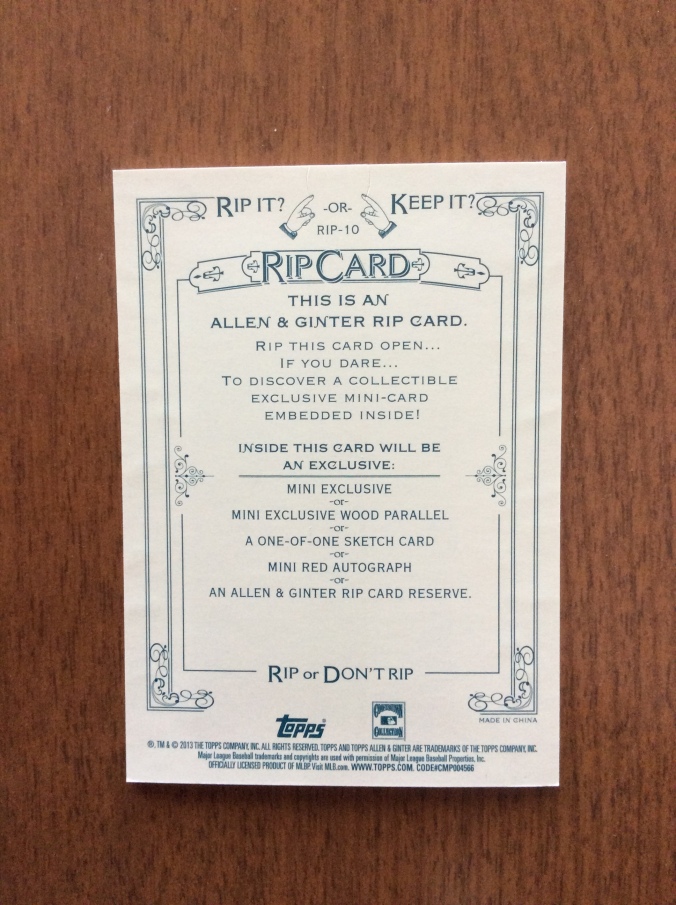 Yea. I think those are my options.

I’m going to marinate in those options for a few days. I’d love your feedback on what you think!

I’ll also take part in the Gint-A-Cuffs competition. It added a new joy to opening a hobby box last year. If you are into A&G, I’d highly recommend checking the blog out!

As always, thank you so much to anyone who reads this as well as all of my trading partners. I truly appreciate all of the help and support!

My hope was this would improve but since my heart surgery it hasn’t. On the nights my body doesn’t seem to want to shut down for rest my mechanical valve goes click, cliCK, CLICK like a jackhammer in my head. As one doctor has said, “That’s a good thing. If you don’t hear it then that’s a problem! You’ll get used to it.”

So, to distract my mind I jump on EBAY.

Being a stay-at-home-dad doesn’t pay much (I make $0.00/hr) but, thankfully, my wife let’s me keep track of the finances.  This allows me to spend a few bucks on The Hobby without worrying about being short for family expenses.

Here’s what the mailman brought recently from the worldwide garage sale.

Since I stopped coIlecting baseball cards from about 1992-2013 thought it would be fun to get a few boxes of 1993 Donruss Series one as a change of pace in my pursuit of the Diamond Kings. Oh, we learn from our mistakes. Between the two boxes all I pulled was a total of 7 DK’s. Three of them were duplicates (Actually, one was a triplicate – anyone want to trade for a Roberto Kelly?).

Note to self – no more boxes for Diamond Kings

I came across a Cal RIpken Diamond Kings lot for less than $10. Usually, I see the 1996 DK’s for more than that. 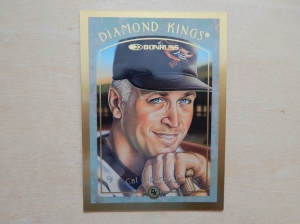 I’m not sure if it’s going to be in my budget to collect the 1997 and 1998 Diamond Kings since they seem to be scarcer. This is a beautiful card, though! 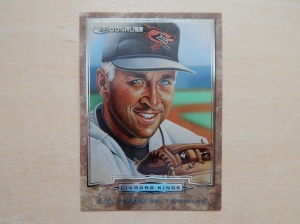 Gallery of Stars? Also painted by Dick Perez? Oh oh. I might have to collect these, too. 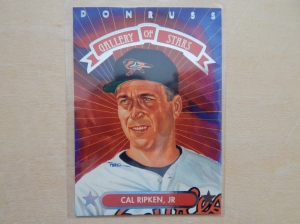 I’m not into football or football cards but I had to have this! 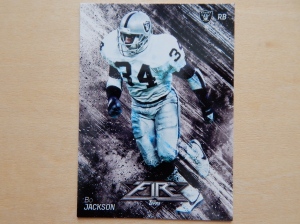 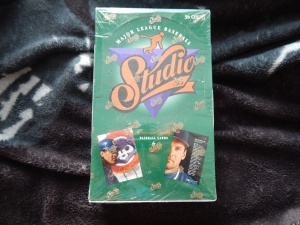 Cardboard connection had an article about cheap stets from the 90’s. I’m still in the process of ripping the packs but this was the first card I saw. 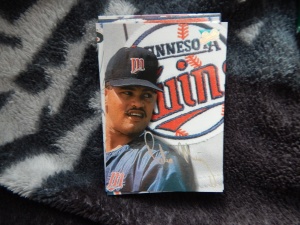 I live in MN so this made me smile. 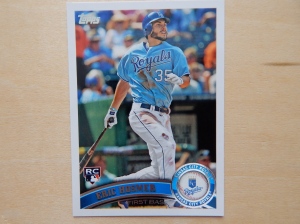 Boxes of 2011 Topps Update seem to go for 3x what they should on ebay thanks to some holy fish in California. I loved the way Hosmer played during the Royal’s playoff run last year and picked his card up for about a buck. Perhaps someday I’ll be able to get the complete 2011 update set for less than a Ben Franklin (Our GREATEST President)!